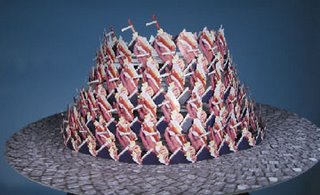 If you go to Artscape this year, please...Don't forget to LOOK AT THE ART!
It is the reason for Artscape. I went with my artsy entourage last Friday for the actual art openings. Unfortunately, we only made it to some of the shows in the MICA area. First we ventured into Theater Project...it its one of those spaces that definitely get's pushed aside and forgotten. My friend Trisha has about 4 pieces in this show. It’s a fiber show that really is worth seeing. Trisha Lane makes these incredible pieces that I like to describe them as stitched stories. Works that put a smile on my face when I look at them. Try to ignore the little office set up in the gallery space…they seem to be going through renovations. We actually got to get a peek of the actor Bill Pullman who is doing some sort of under ground theater event.

Then we wandered up to the FOX building. Ran into many old friends, as well as the X for the first time. Happy to say that time does wonders. No yelling or screaming. Simply caught up on family manners and a hug good bye.

You MUST See the Sondheim Award show in the Fox Building My fav’s were Jason Hugh’s army men Mandela and Eric Dyer’s works. Go check it out! The pattern show in the Bunting Building is also good. Go see the street signs in the small room. You can view the story of Christ via the language of the street sign! (These were created by Peter Zahorecz. A great artist friend of mine who died early this summer riding his skateboard in England. )

I'm sad that I didn't get to Gallery 409 to see the "Dangerous Books; Pushing the Pop-Up" show. Will try to make it there when I get back.

So don't let this heat make you miss Artscape. Its the 25th. anniversary! I believe fireworks are planned off the new Brown Building!
Brought to you by: Jenny Jen at 11:28 PM No comments: 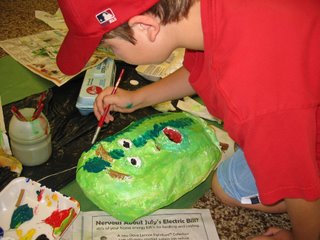 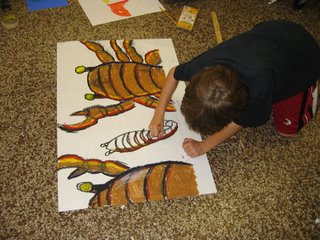 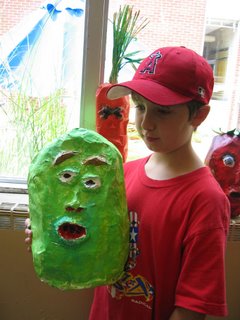 Somebody give me more time in the day please!!!! I keep feeling like my summer is going way too fast and that I simply cannot find enough time in the day to do what I really want to do. We leave for Whistler on Thursday. I’ve been teaching this camp that I really like but for some reason, when a teacher teaches over their summer vacation, something sucks every living ounce of life out of you. I have only found a small speck of time to paint. 5 canvases stretched and one background begun. I know September will be here before I know it. Only 12 full days for me to paint before my show once I return from Canada.
But I have to calm down and not worry. What happens happens..What get’s done..Get’s done.
Though I really should not complain about camp. The best part about teaching this summer enrichment art camp is that my two nephews, Matt and Andy are participating in this camp. Their second year. They have come back very confident and making some incredible works of art. Matt and his scorpion…he is planning on selling for $50 Framed. And Andy’s watermelon are both pictured above. I really love seeing these 2 guys everyday. Makes it all worth it! And before I know it, they will be all grown up.
I’m going to send updates from Whistler. Got a new full-face helmet so I won’t be a bobble head this year. My goal this year is to make it down A line!
Brought to you by: Jenny Jen at 9:17 PM No comments: 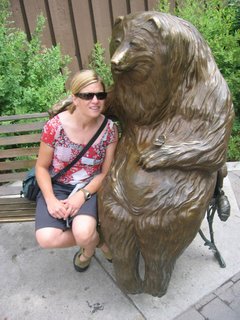 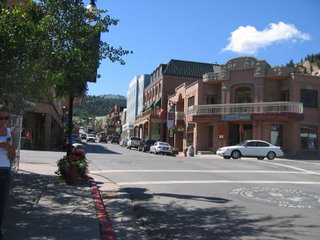 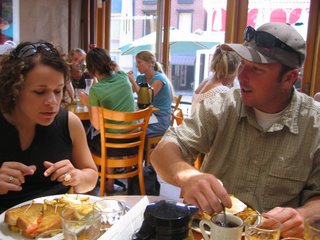 Just got back from Deer Valley-Park City Utah where I got to hang out with my new buddy Franz the bear. Got to actually hang out with some girlie girls while our fella's rode the big dusty hills. Another NORBA race and my guy podium again with 3rd. place. Very dry out there in Utah. Never picked my nose so much! My skin was also screaming for humidity. Flew in to Baltimore at 12:30 AM to 4 hours sleep to art camp today! 8 very cool middle school kids who actually were amazed by doing contour line drawings! I'll try to post some work later on the week. Anyway, here are some pics from my trip. Now its back to teaching and painting and working out. Need to get on the bike! Whistler is 10 days away!
Brought to you by: Jenny Jen at 11:24 PM No comments: 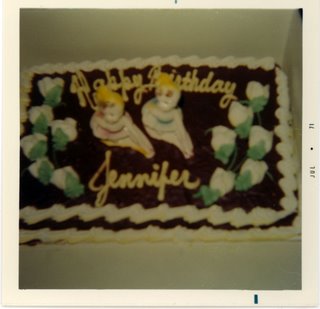 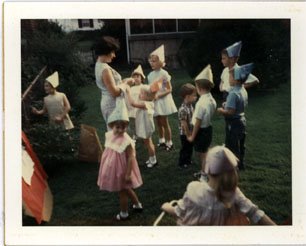 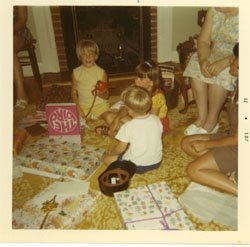 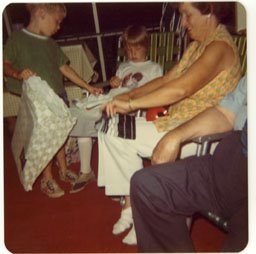 So it’s been a couple of days now since my 43rd. birthday. Nothing too memorable, except I broke my rule of riding my bike down some insane hill or mountaintop on my birthday. I made this rule up on my 40th. Birthday. I first rode my bike down Federal hill on the big 40. Then we were in Whistler for 41, and 42, so that was easy making my rule stick. This year, not the case. First of all, any hill or mountaintop in my range would have been soaking wet. And I just didn’t feel like getting wet anymore after a very long weekend at White Tail. So, what is one to do? I went to the YMCA where to my surprise, I had my first machine birthday greeting. When I pulled my card through the entrance gate, the turnstile belted in a deep voice: ”Happy Birthday”!
So this really got me thinking about the whole meaning of birthdays and celebrations and how they have change, as one gets older. No more family gatherings showering me with presents and birthday cake. I found some old pictures of birthday past. My mother, a retired Elementary school teacher, use to throw the best parties. She made the hats and the games. I remember this one game where each person was blindfolded and had to follow a string that came from a poster of an octopus, that mother drew in her best elementary teacher drawing skills. You followed the string to the end, and some where close to the end of the string was a present! You had to grope around the ground until you found the wrapped gift. I believe in the one picture you can see her with me grasping her arm, as we play pin- the tail-on- the -donkey. I think this was my sister’s party, not mine, But I love this photo. How dressed up we got to grope around in the dirt! The other pictures are of my 9th. And 10th. Birthdays and one of my bday cakes. Cakes then had ceramic figurines that you could have for life to remember your special day. During these two birthdays, I received gifts that were two of my favorite. The only thing they had in common were the orange red plastic material that they were both made of. My grandmother is holding the one on her lap. A transistor radio the form of a sphere. It had a chain with a ring on it in which one could hold on to as one gets up on top of the monkey bars at school. A favorite pass time of the cool girls of the fifth grade at Catonsville Elementary School. This present is what got me in to the cool group! The other present is the one that I am holding. It was called The Bird, and it was simply a plastic bird that hung from a spring. We use to have it hanging from our light that my sister and I had in our shared attic room. I think it really hurt when it hit you in the head.
Yes, those were the birthday that I am so lucky to have had. Now, they are just as good, just different. I now get cards from Title companies, Victoria Secrets, Banana Republic as well as my tax guy. Dad took Patrick and I out to a very fancy and expensive dinner. They actually honor me with a personalized menu! Patrick gave me absolutely awesome gifts! And my mom, she got her knee replaced on my birthday. She reminince on her two hospital experiences of June 28. At lease the knee won’t be keeping her up at night crying! Let’s hope not.
Brought to you by: Jenny Jen at 11:39 PM No comments: