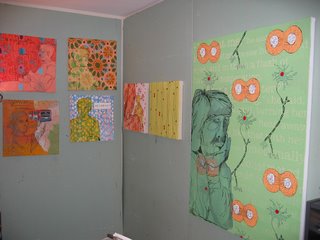 One more painting to go. One more contour line drawing. It maybe a self portrait, it may be Patrick. We shall see. Anyway, I am quite happy with the results. Here's a quick peek of the studio in present state. So, hope everyone is coming! Check out the new web page for salt at www.salttavern.com. Don't forget to save the date...September 9, 3-5. The show will be hanged this Saturday. It will be up for two months. Going to try to work on some tee shirts for the opening. Will post when ready!
Brought to you by: Jenny Jen at 7:34 PM No comments: 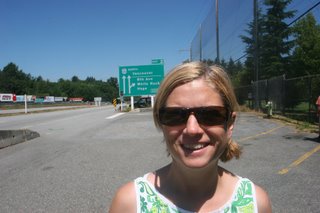 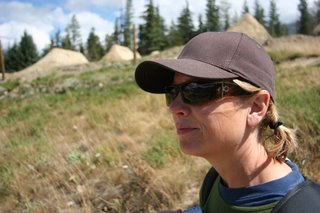 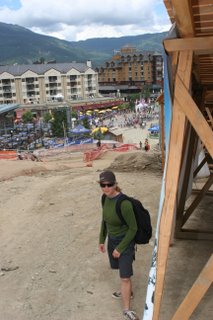 There is nothing as awful as having to teach in a sweltering hot classroom. Two horrible humid days with schedule craziness and 40 kids in a classroom! Who ever's idea it was of having kids go back to school before Labor Day needs to be shot! However, today was very gracious and brought us some cooler air. It reminded me that cool air of the Canadian summer. I finally got some pics from our trip way back when. So I thought I'd reminisce a bit today. Once one goes to cafeteria duty, you feel like you never left. So I really wanted to go back and look at these pictures of happy days.
Brought to you by: Jenny Jen at 7:22 PM No comments: 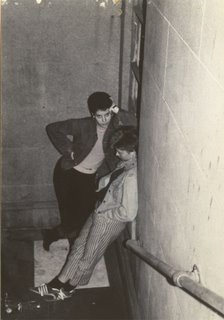 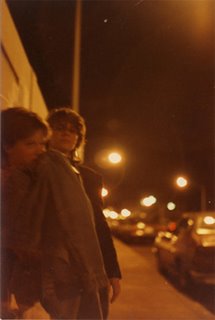 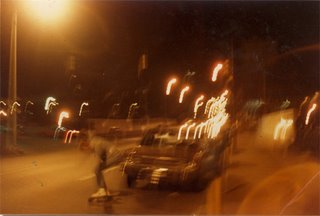 Tomorrow is the big day. The beginning of another school year. I am excited to see what new students I will have to deal with and mold. Last week was a week of meetings and schedule hell. Tomorrow will also be the same schedule hell. But I am optimistic and know that all will smooth itself out. This weekend was great! Started it out by going to see Little Miss Sunshine! An absolute must see. The characters are exactly what you want them to be. Strange and quirky and very realistic in a strange sort of way. Steve Carell is probably what I’d imagine him to be in true life. Sometimes his character in the Office is so obnoxious I like seeing him in movies like this one. I must get out and see and then own when it comes out on DVD.
The weekend continued with massive house cleaning and a party in Roland Park. With people I don’t know. Friends of a friend sort of party. Ran into someone I met not too long ago. In conversation we realized we have been to the same places and know a lot of the same people. Its more reunions with people from the Baltimore Punk Rock era of the 80’s. Oh yeah..a big treat, I also ran into another person, Patty from Marble Bar days at the freshman orientation at Parkville. Looks like I will be teaching her son. I loved the fact that her Husband Pierre remembered me as the girl who drove the Yugo! Yes that was me! I had it for about 10 months before someone hit me in the rear and totaled the car.
I wanted to post pics of my paintings in their finished state but my battery died. Maybe tomorrow. So I decided to post pictures from the very early 80’s. That’s Missy and I in the stairwell at the Marble Bar. My Mohawk was growing out..How Punk Rock? . Milly and I are on the Bridge on Maryland Avenue right around the corner from the Club Chuck. And then that’s Billy Stevenson jumping his skateboard off of my 1971 Dodge Dart! That’s on Charles Street on the Bridge by Penn Station. You used to be able to park on it back then. Anyway, these are more than 20 years old. Enjoy
Brought to you by: Jenny Jen at 9:58 PM 2 comments:

Baltimore SUCKS..but I guess it's OK if you're a painter

So what does one do when cooped up in the studio for days on end? One gets tired of listening to the same old songs programmed into their itunes. Plus sometimes, you really get lonely and you need to hear some human voice periodically. I am very thankful that I only have my computer in my studio. Forces me not to listen to local radio. Makes me search out into the world to find that perfect radio station. And I think I have come close to finding such a station. A station that has convinced me that Baltimore surely SUCKS when it comes to our cultural side. If we have one, its hiding in some old warehouse space in which one must be In the know, in order to know what’s going on. We use to collect flyers back in the 80’s. That was how we knew which punk rock band was playing, and in what bad part of town we would have to venture out to see. Or you simply hung out on the corner of Franklin and Eutaw to see who was playing at the Marble, the galaxy ballroom, or Jules’s loft. Ahh, those were the days. Anyway, you never heard about them on any radio station. Maybe WCVT, Towson’s radio station back then that truly rocked! Today’s station, wtmd, seems to play the same people, the same songs all the time....keeping it conservative with the alternative music of today. John Hopkins’s station in the early 80's, played great music late at night, around 10, but you had to be in Charles Village to hear it. They would also play local bands as well as artistic eclectic punk rock music. WHFS was out of Bethesda then. They were probably the best. I believe they were commercial free. They use to read off lots of useful lists. Like who was playing where…got lots of the load down on the DC scene from these guys. My favorite was the list of who was going west and needed a ride, or was willing to give a ride. They also read off employment opportunities.

Anyway, why all this talk about when Baltimore had decent radio stations? I found this station off of itunes. 90.3, out of Seattle. It is commercial free. A public radio station out of the University of Washington. I have become a big fan of Seattle. We get to travel there every summer to visit my in-laws. We never really get to spend enough time there. But I digress. Really you have to listen to this station. Tonight if I was in Seattle, I would have many choices as to what to do and who to go see. Check out this list of events:
BALTIC ROOM
Dead, Goly Grim, Penetration Camp, Slicing Grandpa (9pm)

this is small sampling of the list.
I love the names of the bands. And get this, if you’re under 21, most clubs are smart and have all ages shows. I also found out that I could go listen to Eric Fishel speak, one of my favorite Artist. Last week I could of seen Etta James for free at the Zoo!
So check out this station. They are currently playing old vinyl records of a local hard-core band from 1981. You can find them on the web at www.kexp.org. Just remember they are 3 hours behind!
But I guess if I shouldn’t be distracted and only work on my paintings. I guess it’s a good thing I live in Baltimore.
Brought to you by: Jenny Jen at 7:42 PM No comments:

THis is my last day of summer 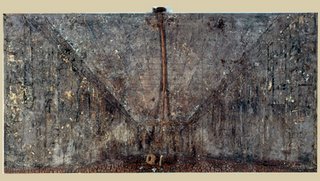 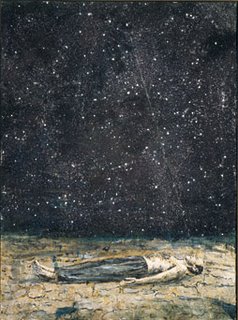 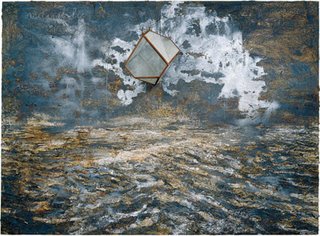 Today was my last weekday of summer vacation. I spent it with my best bud from college and one of my teaching colleagues: Mildred and James, along with their two tag-a-longers: Phoebe and Ivan. Off to D.C. to go look at Art! We first descended on the Phillips collections. I had only been there once when I was in undergrad. I completely forgot how incredible that collection is. They have this amazing collection of Bonnards, Diebenkorns, Gustons, and the Rothko room. I am amazed by how color, and its strengths, dimensions and layers can be so effective. This collection is hanged in such a way that all paintings are beautifully complimented. It was well worth the $12 to get in. I will not wait another 20 years before I go back. In fact I must take my students.
After traveling to Dupont Circle, we jumped back onto the metro to the Smithsonian for $12 salads at the National Gallery Café and quick run through the Rousseau exhibit that was good for a silly laugh. How was it that this untrained artist got famous?
Then to the show that motivated me to spend my last day of vacation in DC: Anselm Kiefer ‘s Heaven and Earth exhibit at the Hirshhorn. Pictures in books do not do this man’s work justice. You have to experience them. In their grand scale and multiple layers. One images this 60 some old man in his German factory studio space. As I stumble over piles of pictures and books in my studio to reach my paints, I am so jealous of those you have massive spaces to work in. It is a dream of mine. Maybe when I am 60 some. Anyway, the show ends September 10 so go down there NOW and see it.
Brought to you by: Jenny Jen at 11:56 PM No comments: 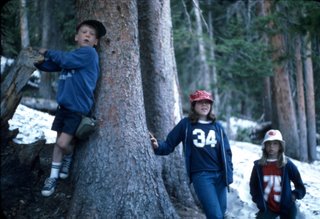 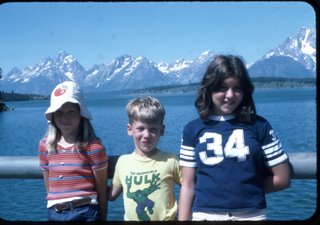 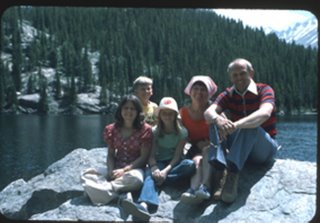 Life sure does get busy when you're watching the days. I got the depressing "back to school" letter on Friday. Not really ready to go back. This summer was incredible with lots of clean air, mountains and just plain old space! Living in Baltimore makes one forget about what space looks like, or actually feels like. Utah is 85% unused land. You can see so far. And Canada...so clean! Patrick has a great run down on our trip. His computer however has taken ill and is away for a bit. But keep posted, it will be up soon. He also has all of our good pics.
So in the meantime I thought I would post some pictures of my family vacation from 1976 or '75. Not sure...but it was this great trip in which we took friends of the family's pop-up camper and car and took a month to see the WEST. We started with the Badlands, Mount Rushmore, went all though Colorado, Yellowstone, the Grand Teton and Jacksonhole, WY, then down to the Grand Canyon, Salt Lake City and then through the Dessert to San Francisco. We flew home and then our friends flew to San Fran and brought the camper home. I can only imagine what that trip would cost today! So I got to re-visit the outside of the Mormon visitor center in Salt Lake this year on the way to the airport.
And now I am down to one week left before its back to full time work. The paintings are going well. To interpret Photoshop rendering in paint is a new challenge for me. They are changing and evolving. The invites have been sent out. Still needing some addresses. So if you didn't get one give me a holler.
Sleep Sleep Time
Brought to you by: Jenny Jen at 11:11 PM No comments:

I'm back and busy! 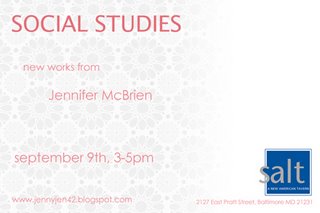 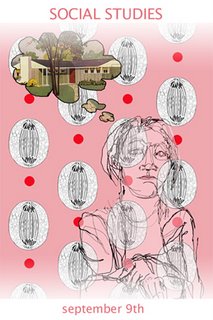 We arrived home yesterday evening...a bit later than expected thanks to American West. Will write later about that one....or check out Patrick's story on our Whistler on his traction page. Had an excellent time! I found new heights on my bicycle. So glad I brought her along. We found air together! I've discovered some new techniques in jumping over those doubles! I'll post pics later. Came home to hot hot weather and a studio yelling my name! As well as the cats. Have gone right to work. The show is coming up. I'll be sending invites out soon. Email me if you want a hard copy of it. j.mcbrien@verizon.net
Ok...back to work.
Brought to you by: Jenny Jen at 12:49 AM No comments: